March 13, 2013 — Solvang Antiques and the Judith Hale Gallery are presenting “Flowers: Still and Wild” through April. 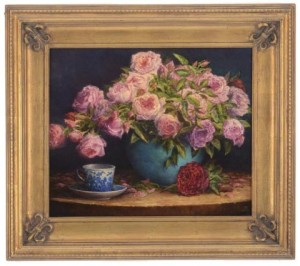 “Tea for One” by Dirk Foslien will be part of a show at Solvang Antiques through April.

Dirk Foslien is one of the featured artists for this show, long collected by locals and visitors to the gallery.

A native Californian, Foslien became interested in art early in his life through the influence of his artist father. He studied graphic arts and three-dimensional design in college, giving him a good foundation and technical ability necessary to create art from concept to finished works. He worked as a graphic illustrator in the aerospace industry.

However, he always felt his calling in the fine arts, and after a number of years in the commercial graphics world, he decided to make the move into fine arts. He attended Muse Academy and Studio in Baltimore, where he learned the painting methods and traditions of the Old Masters. His style is creative and expressive, and reflects old world atmosphere.

Another favorite in the show is Gene Register, who dramatically captures the viewer’s attention with tranquil beauty and exquisite precision. His still life images reflect warmth, combined with refined elegance. Nature portraits are revealed with a certain reverence, entwined with incredible lushness.

Register was born in Georgia, and continued much of his career in Chicago, where he was art instructor at The American Academy of Art for many years.

Other participating artists are Sheryl Knight, Betty Carr, Nancy Phelps, Joe Barbieri, Anne Bridge, Robert Davis and Lou Mariani. Each one has a selection of new works on display; some are still life arrangements and others are wildflowers.

Back to main Press page