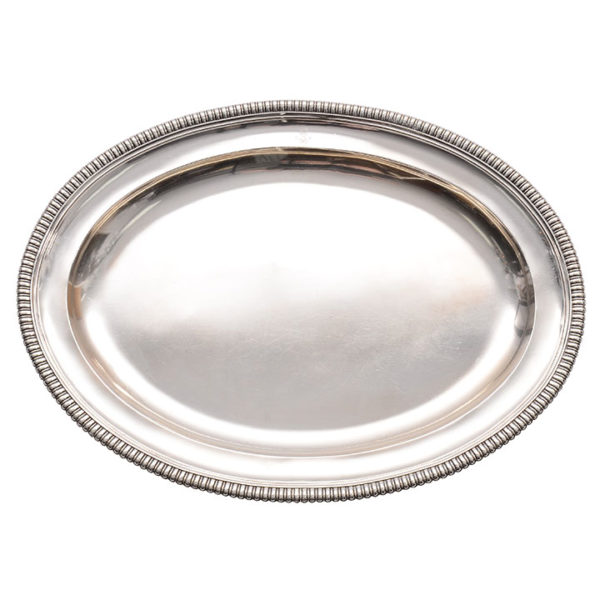 Antique monumental English George III Paul Storr sterling silver meat platter with gadrooned edge, circa 1810. This meat platter is of Royal Family origin as this piece is marked with a Royal crown at the top edge. The large sterling silver platter by exceptionally famous silversmith Paul Storr, was formerly in the Yale University Museum. It was a donation from the family of James R Neale, a 1891 Yale graduate, after his death. This is is known to be one of the largest pieces ever made by Storr and represents a major investment opportunity. Storr is considered the finest maker of the 19th century.

Paul Storr was England’s most celebrated silversmith during the first half of the nineteenth century. His pieces historically and currently adorn royal palaces and the finest stately homes throughout Europe and the world.

Storr’s reputation rests on his mastery of the neo-Classical style developed in the Regency period. He quickly became the most prominent silversmith of the nineteenth century, producing much of the silver purchased by King George III and King George IV.

Storr entered his first mark in the first part of 1792, which reflects his short-lived partnership with William Frisbee. Soon after, he began to use his PS mark, which he maintained throughout his career with only minor changes.

Much of Storr’s success was due to the influence of Philip Rundell, of the popular silver retailing firm, Rundell, Bridge and Rundell. Rundell’s firm nearly monopolized the early nineteenth-century market for superior silver and obtained the Royal Warrant in 1806. This shrewd businessman realized the talent of Paul Storr and began pursuing him in 1803, however it was not until 1807 that Storr finally joined the firm.

After many years of working for Rundell, Storr realized he had lost much of his artistic freedom and by 1819 he left the firm to open his own shop, turning his attentions towards more naturalistic designs. After only a few years of independence, Storr realized he needed a centralized retail location and partnered with John Mortimer, founding Storr and Mortimer in 1822 on New Bond Street.