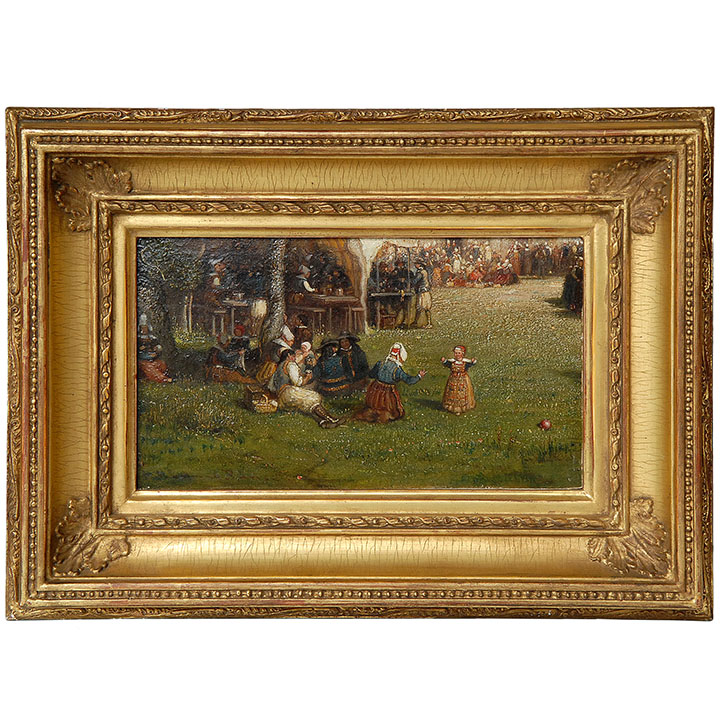 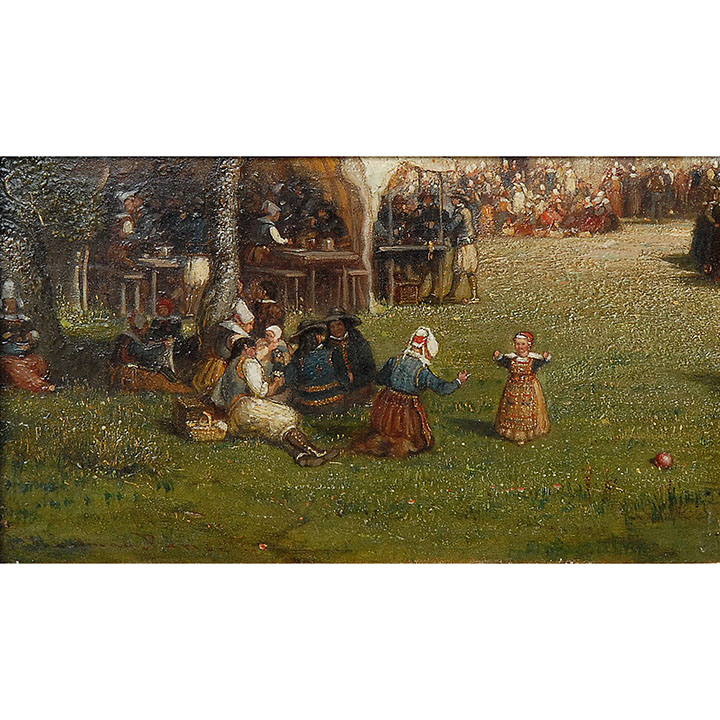 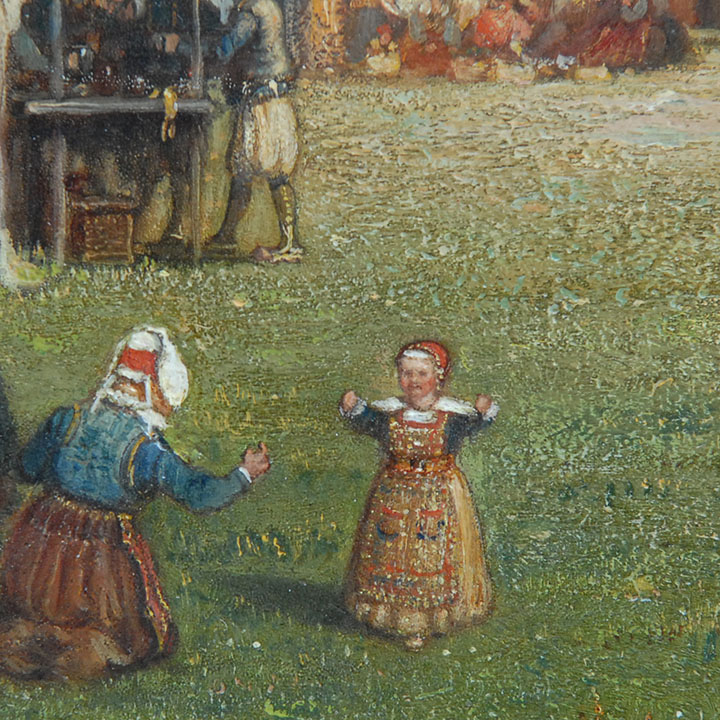 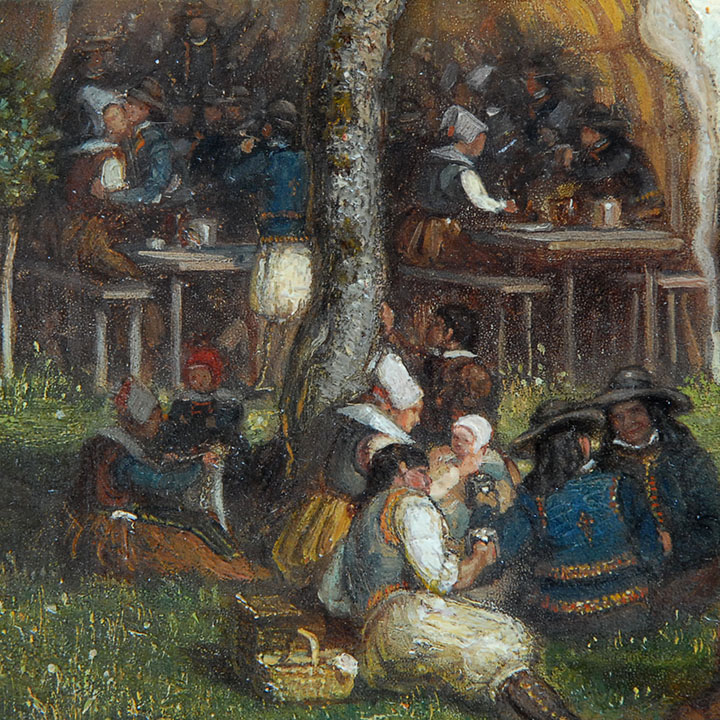 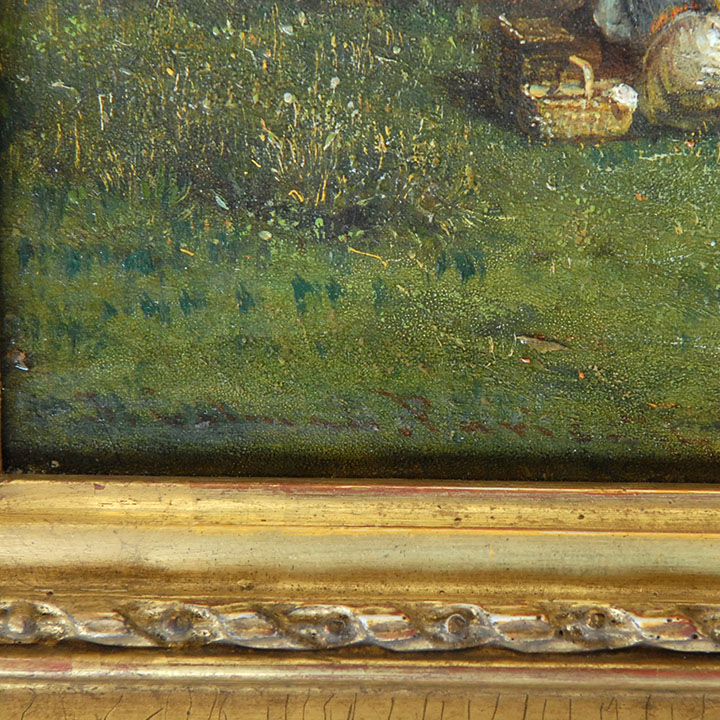 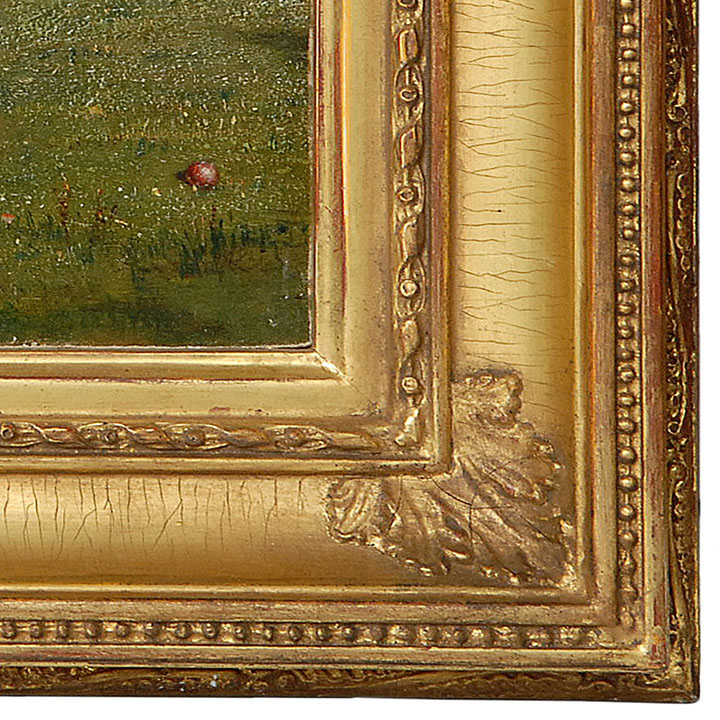 Oil Painting on Board of a Picnic by Samuel Colman

Antique American oil on board of a picnic by Samuel Colman (1832-1920) of New York, circa 1870. The scene in this antique painting shows a figure eating and drinking at a picnic. This antique oil painting also depicts a large gathering of family and friends at a picnic. The joyful child walking towards her mother warms the soul of the viewer. This Colman painting is signed in the lower left corner. Colman traveled to France with L.C. Tiffany where he painted this picture. Colman started Tiffany Studios with L.C. Tiffany.

Samuel Colman was an important painter of the second generation of Hudson River School artists. He was born in Portland, Maine in 1832 but was raised in New York City. His father, as an art book dealer and publisher, exposed his son to a world of fine art prints and a community of artists and writers. Among Samuel’s first teachers was Hudson River School painter Asher B. Durand. Under this gifted artist’s guidance, Samuel made considerable strides in his painting and by the age of 18 exhibited his first work, entitled Morning, at the National Academy of Design. In 1860, Colman became an associate professor at the Academy and later that year, embarked on the first of many trips to Europe. He traveled to Switzerland, Italy, and France, Spain, Morocco and even North Africa. He became a full member of the National Academy of Design in 1862.

Upon returning to the United States, Colman continued to follow his adventurous spirit away from the beaten path. While most of his colleagues stayed close to home, only he and Thomas Moran journeyed to the rugged landscapes of the American West, painting the breathtaking regions of Utah, Wyoming, the Oregon Trail and the Grand Canyon in Arizona.

As his style matured, it developed a subtle luminescent quality, manipulating light to create a sparkling silvery atmosphere. His goal was not to create a dramatic scene, but a delicate reflection. Samuel Colman’s works are widely held in public and private collections.

Colman was a key person in establishing watercolor as an independent medium that was good for more than just sketching. He served as one of the founders and the first president of the American Society of Watercolor Painters, founded in 1866. Colman wrote two books on art: Nature’s Harmonic Unity and Proportional Form. He was also an etcher, art collector, an authority on oriental art and porcelains, and an interior designer, working with John La Farge and Louis Tiffany.