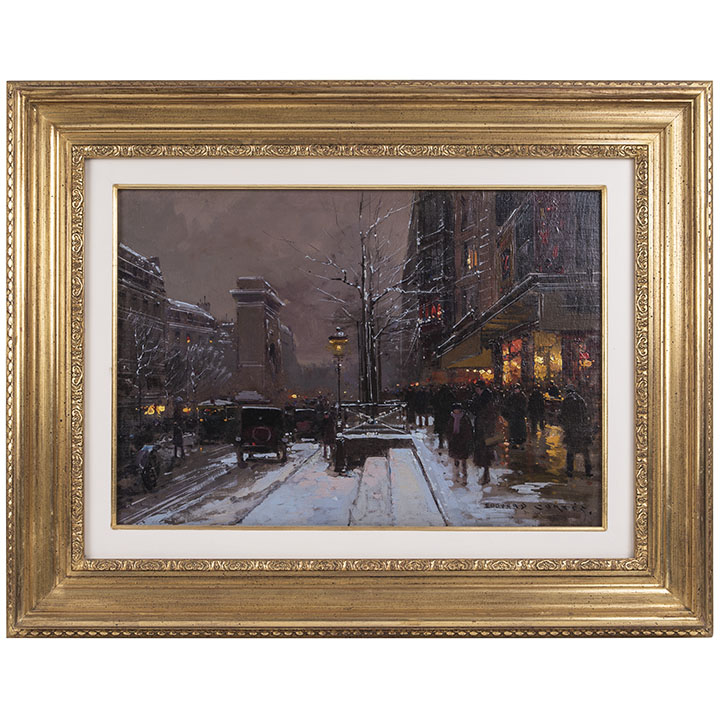 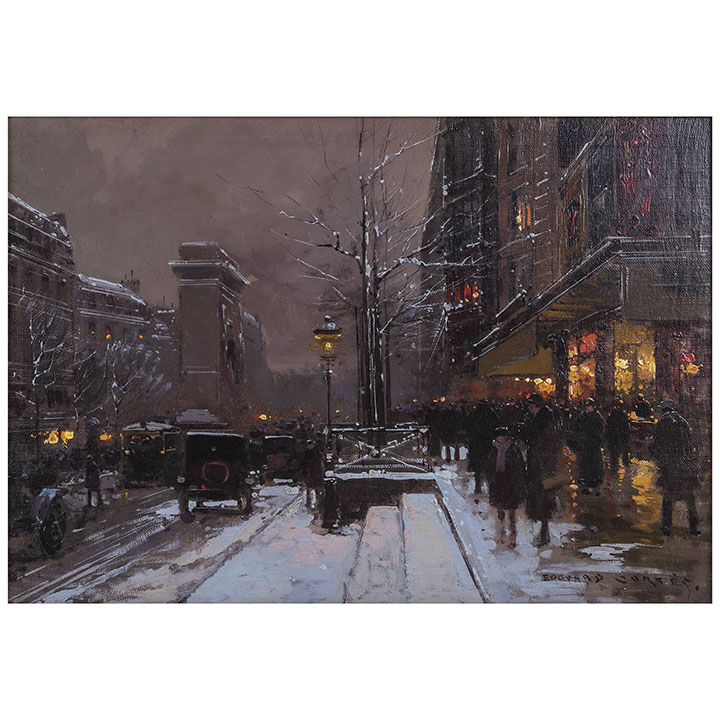 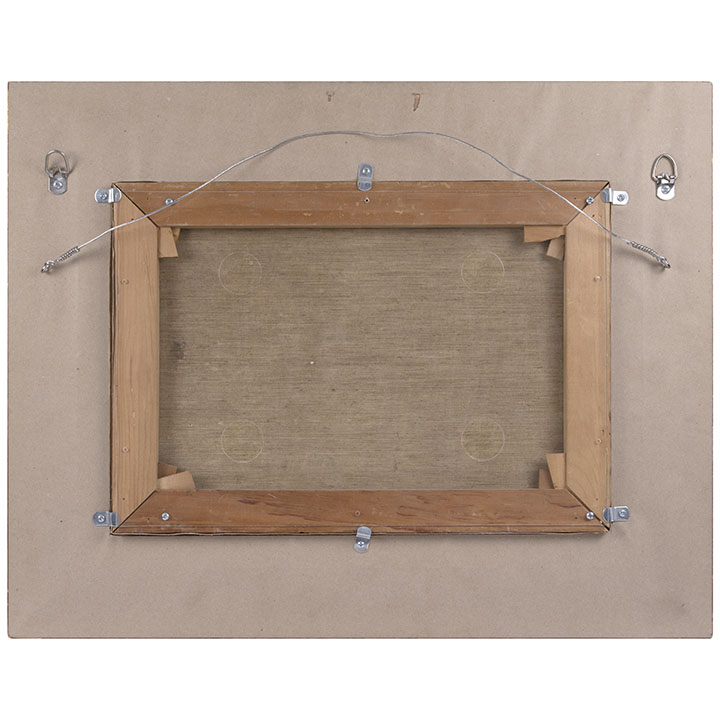 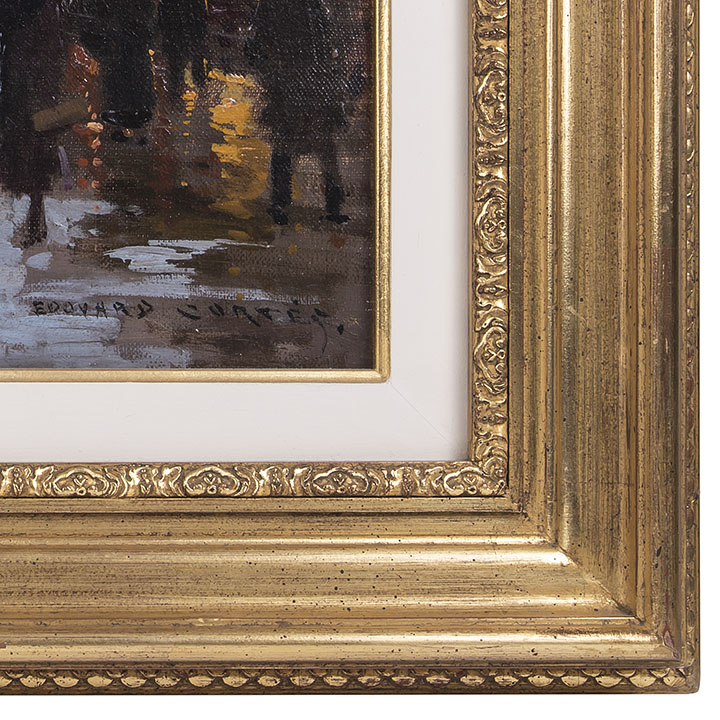 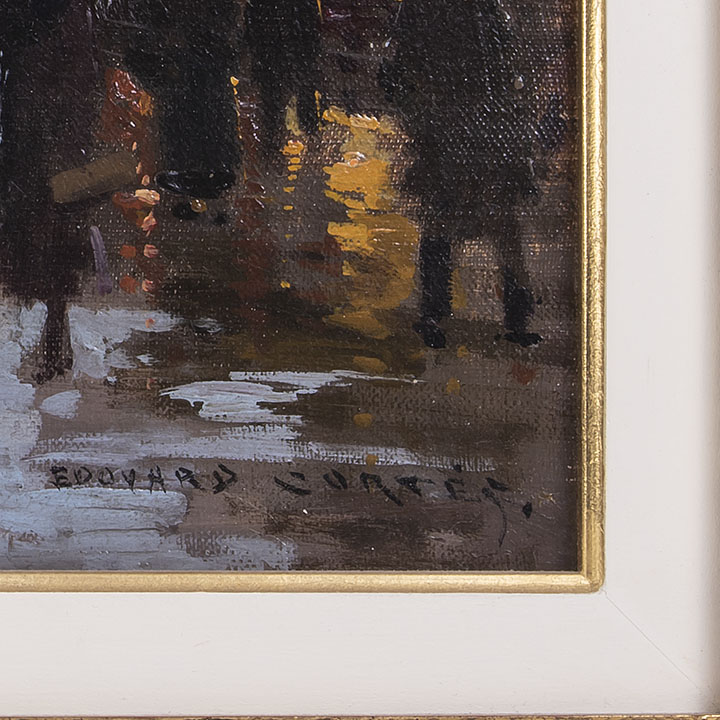 Porte Saint-Denis, Winter by renowned French painter Édouard Leon Cortès (1882-1969) was painted during the peak of his career in the 1930’s. This striking winter street scene captures the charm and warm winter light of old Paris near the stunning Ponte Saint-Denis. This important oil exhibits the style Cortès chose to portray in the landmarks he painted. The bold splashes of color common to Cortès’ oeuvre are clear in this street scene with the lights shining brightly from windows and the rich glow of the street lanterns against the backdrop of an overcast sky. Cortès’ portrayals of the bustling Paris streets filled with pedestrians and automobiles evoke the warmth and essence of the City of Lights.

Cortès is known as the “Parisian Poet of Painting” for his ability to capture the romantic Parisian atmosphere with his brushes. He was surrounded by the landmarks of the city, and he knew them well, recreating them in his poetic script on canvas. Paris was his true love.   His reputation is that of one of the great Post Impressionists.

Born in 1882 in Lagny-sur-Marne, France, Cortès’ destiny was to become a painter. His father, Antonio Cortès, was a Spanish Court painter, important in his own right, as was his older brother Andre. The young Édouard was greatly influenced, and instructed, by them both. While growing up, he was surrounded by great Impressionist artists who were family friends, namely Maximilian Luce, Camille Pissaro and Lucien Pissaro, among others. Lagny-sur-Marne was well-known for its picturesque landscapes, surrounding Cortès with further inspiration. At seventeen, he began his studies at the Ecole des Beaux-Arts in Paris. His fame was soon earned after he contributed a dramatic Parisian street scene at dusk to the Societe des Artistes Francaise. Thus began his dedication to capturing the enchantment of Paris on canvas.

Though he repeatedly painted the very same streets of Paris, he never lost his affection for the changing light and seasons, bringing its magic to every canvas he touched. Cortès’ paintings were in high demand throughout his life and continue to be so today, as they are favorites among collectors for their nostalgia and perspective of his beloved City of Lights.