The 1920s was a time of advancement in the arts, culture and design. The artist Erté (1892-1990) captured the essence of the Art Deco period in his paintings, drawings, costume and jewelry design.

Erté was born Roman Petrovich Tyrtov in St. Petersburg, Russia on November 23, 1892. His father was a distinguished admiral in the Russian Fleet. However, instead of developing an interest in the military, Erté showed considerable promise in the field of costume, creating his first successful design at the age of five.

Erté moved to Paris in 1912, to further his career as a fashion designer. After he moved, he started drawing under the pseudonym Erté, created from the French pronunciation of his initials. In 1915, he secured a contract with Harper’s Bazaar magazine. He illustrated fashions in Harper’s Bazaar for 22 years. 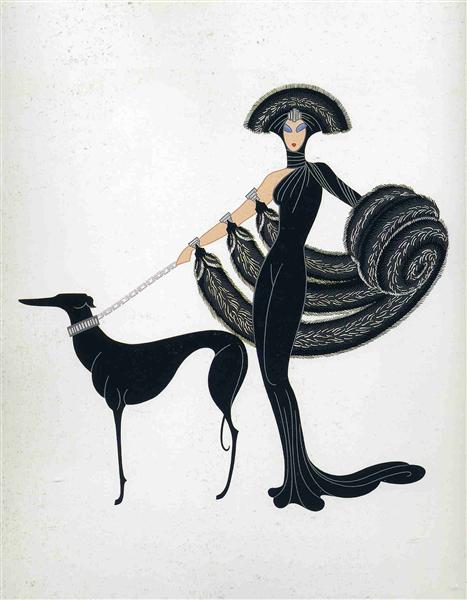 “Costume Design: A Woman Dressed in Black, With Furs, Hat And Dog On A Lead” Click for source. 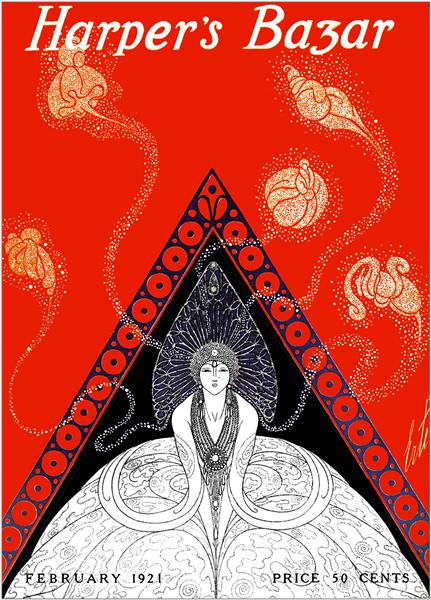 During the 1920s, Erté also created costumes and designed stage sets for the Follies-Bergère in Paris, as well as George White’s Scandals in New York City. Later, he would design costumes for the Ziegfeld Follies and other various Broadway productions. He found success designing for actresses such as Gaby Deslys and Irène Bordoni.

In 1967, after a long and productive career in theater, and drawing covers for magazines such as Cosmopolitan, Vogue, and Ladies’ Home Journal, Erté met art dealer Eric Estorick. Estorick’s influence was a major factor in the revival of Erté’s career. Erté’s existing drawings and paintings were displayed in galleries in New York and London, and soon there became an immediate demand for new work worldwide.

Erté worked tirelessly until his death in 1990 at the age of 97, designing bottles for Courvoisier and branching into the realm of bronze sculpture in the latter part of his life. In the 1920s and even in the 1960s with the Art Deco revival, Erté has been celebrated for his ability to capture the elegance and poise of the human body. His artwork is the quintessence of the Art Deco period, captivating audiences even today.

We are honored to be carrying a limited edition estate piece of jewelry by Erté. These Sterling silver and 14 karat yellow gold earrings have top and bottom sections set with 18 round brilliant diamonds at 0.26 carat total weight SI1-2 clarity H-I color, with two oval onyx at the top. They are edition 22/500 and signed “Erté”. Appraised at $5,000.

Silver and Yellow Gold Earrings With Onyx and Diamonds by Erté. Click the photo to shop this item.